0 Items
The Zululand Conservation Trust in partnership with Manyoni Private Game Reserve and Helping Rhinos have been working towards a vision to create a Mega Park. Northern KwaZulu-Natal has a large number of protected areas and game reserves and therefore lots of potential for expansion through various corridors. Identifying corridors to link protected areas is the first step to ultimately create a mega-park.

The time to expand protected areas is now due to the pressure we are receiving from the rhino poaching crisis. It is becoming more imperative that private reserves have bulk capacity so that they can provide intense monitoring to protect the wild rhino populations. Some of the protected areas in our immediate region form part of the Black Rhino Range Expansion Projects, and with corridors, linking these reserves can result in natural movement of rhino between parks, which will improve genetics and reduce management.

Expanding protected areas and creating corridors has substantial conservation benefits. Wildlife moving between parks will increase genetic diversity in the populations as inbreeding is a big concern in these isolated populations. The increased range will reduce breakouts and costs associated with recovery of these animals such as wild dog, lion and elephant.

Across Africa, there are an estimated 6,600 Wild Dogs in the wild, making them the continent’s 2nd most endangered carnivore behind the Ethiopian Wolf. Wild dogs require large expanses of land and often fall victim to human-wildlife conflict in small to medium-sized protected areas. Larger areas ensure space for dispersal animals to break away from the pack and form secondary packs within protected areas rather than breakouts into “unsafe” areas.
Pangolins are one of the most trafficked animals on the globe and have been locally extinct in Northern KZN for a couple of decades. Some of the protected areas in the region including Manyoni are rehabilitating pangolins back into the wild. These defenceless creatures frequently move out of the park into areas where they are at risk and therefore creating larger expanses of land benefit even these small animals.

With increased human encroachment into natural tracts of land opportunity for expansion of protected land decreases, it is therefore vital that we connect areas to safeguard the endangered species and the habitats they depend on. The motivation behind the creation of a larger protected area resonates well with the mission of Zululand Conservation Trust, which is to save endangered spaces for endangered species.

The northern KZN region is one of the most poverty-stricken areas in the country and in desperate need for change. The mega-park will not only boost conservation efforts in the region but also tourism and the local economy. Communities bordering the park will gain from increased employment and small business opportunities, which they desperately need. We also place great value on involving the community in conservation efforts, our hope is that with a larger area, and more focussed management we can utilise the collaborative opportunity to upskill and educate communities on the borders of this mega park with structured community outreach programmes.

With the range of conservation skills and increased collaboration and co-management, the park will be a world-class protected area and tourist destination. Below is a map showing all the protected areas in the Zululand region. 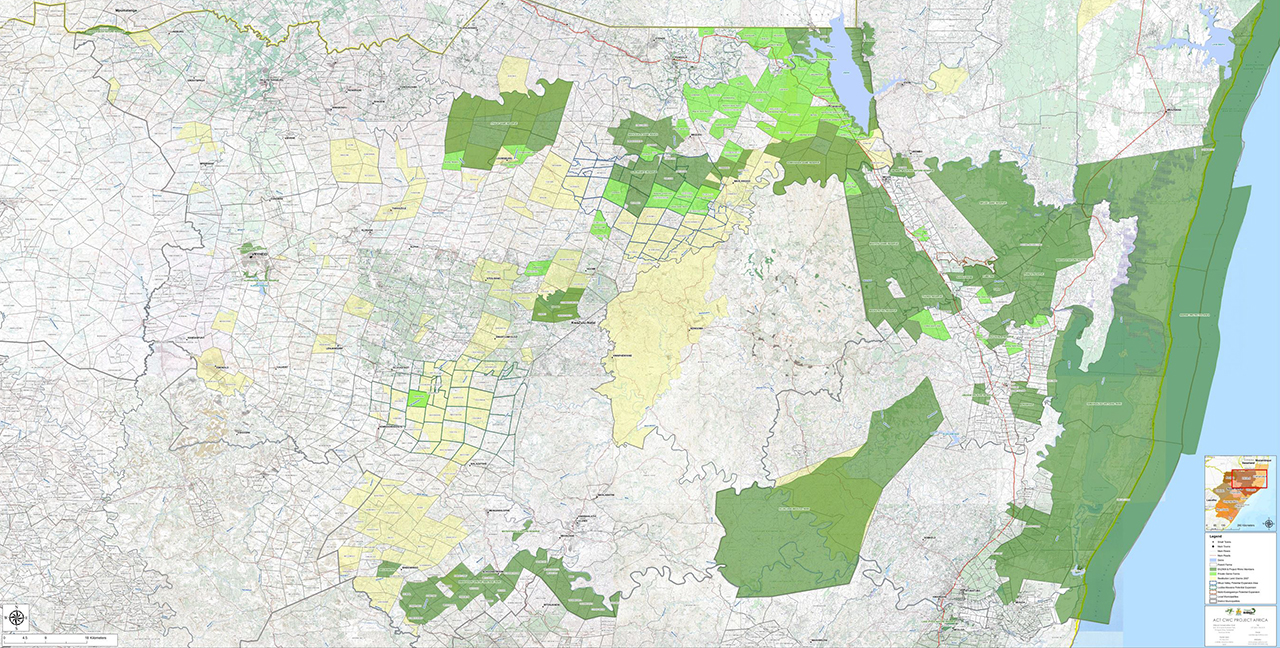